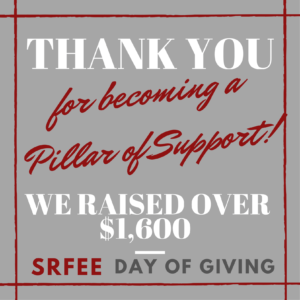 A HUGE Thank You to all who have donated to our First Annual Day of Giving Fundraising drive! We greatly appreciate your support!

The school that raised the most $ will be presented with their award at the May 27, 2021 Board of Education Meeting.

There is never a bad time to help SRFEE continue to provide Scholarships & Mini-Grants by becoming a Pillar of Support. Donate here: https://www.paypal.com/donate/?hosted_button_id=9DN8HTCKSJTQC

What a great start! We accept donations at any t

Help your school achieve the most donations! Her

TODAY is the SRFEE day of Giving! Please Become

Excellence The School that raises the most money w